The clouds finally (sort of) cleared and we left to stare at a marvellous valley view on the fourth morning, something that we were all too tired and wet to even think about the evening before.

There wasn’t a lot of blue in the sky but the forecast was for a mostly dry day, and given the previous day we were happy with that. I think Petar (the guide and organiser) was too, given how he’d warned that we might not be able to ride that day if it was anything like the day before due to the steep climbs. 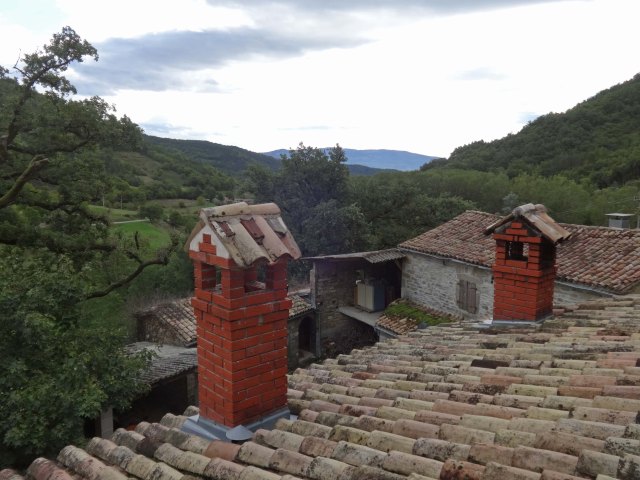 The view from the room’s balcony. As with many of these kinds of things, it was somewhat wasted as we didn’t have much time there. 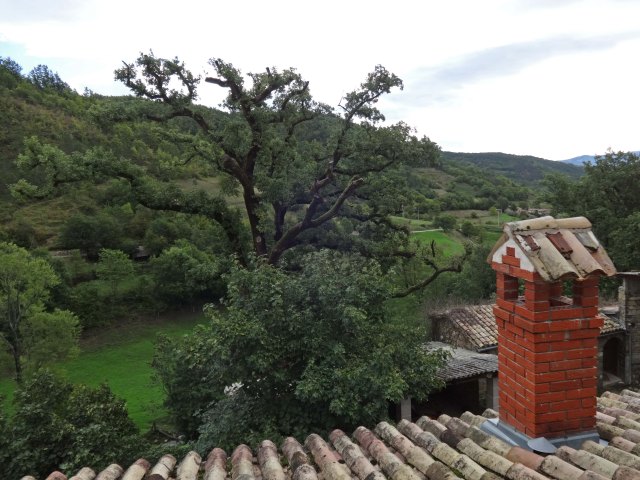 But at least there was a tree to look at. 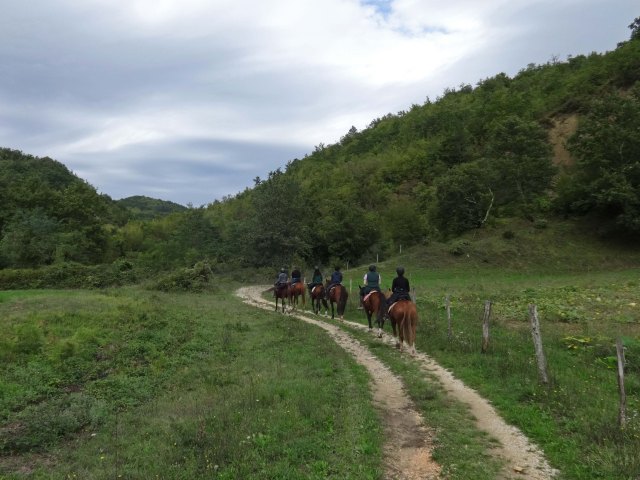 But soon the “serious” business of riding started, and I took my position at the back of the ride behind half a dozen invisible horses. 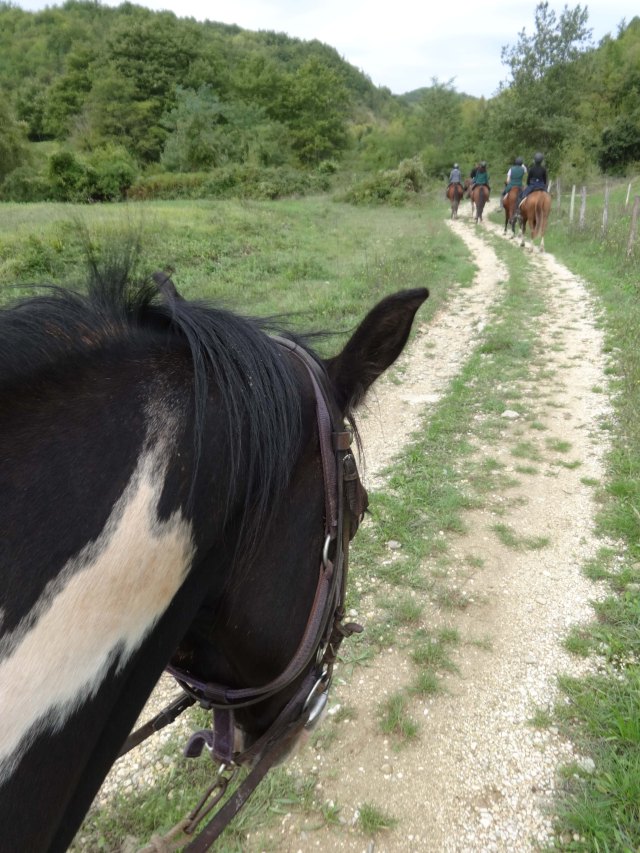 Again, Apache didn’t seem to care, as long as they were in sight. 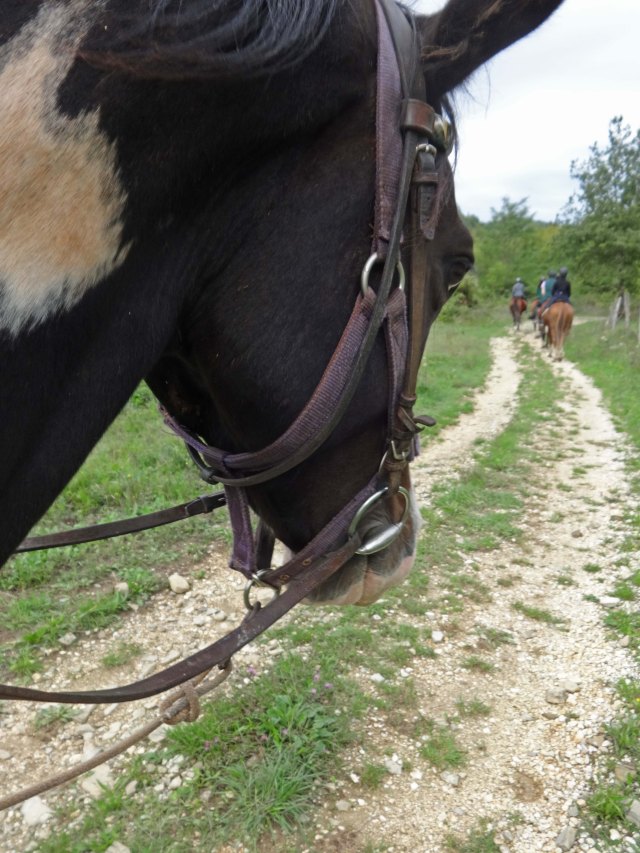 A horse’s eye view of horses in the distance. 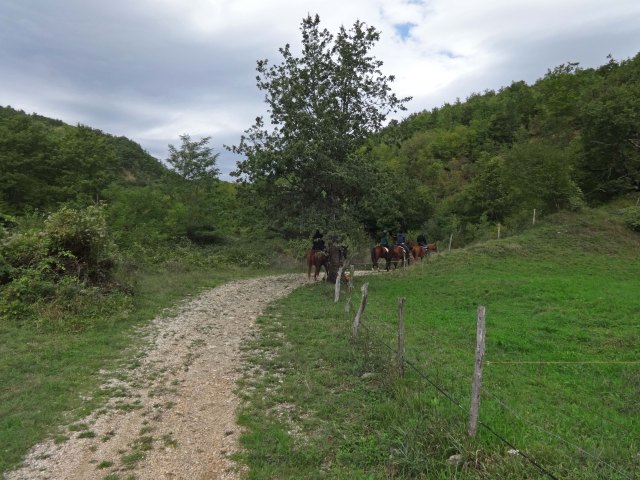 We seemed to be getting more relaxed at how big the gap was. Thankfully, gravel paths were easy to follow, but there were a few occasions when I wondered if I might miss a gap in a hedge that everyone else had turned through. 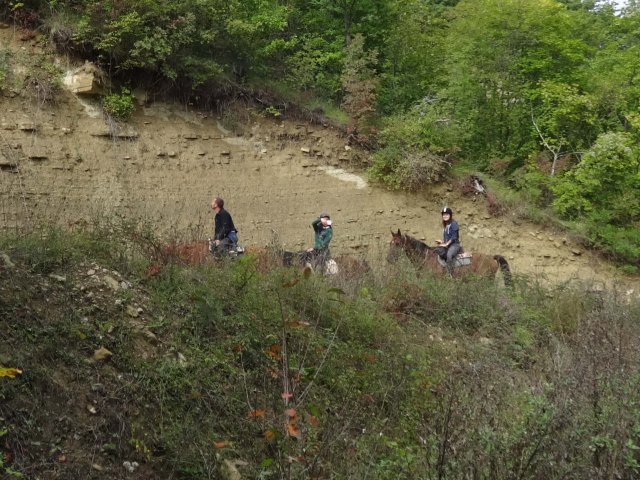 The advantage of being at the back was getting photos of everyone else on the switchbacks. 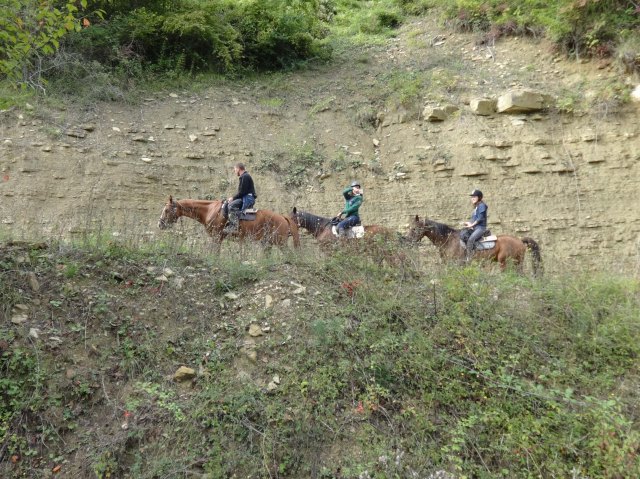 And they (Patrick here) could take photos of me too. 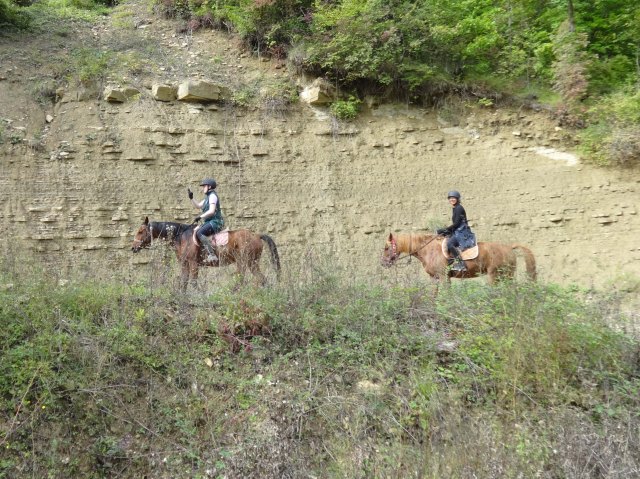 And finally Patrick and Ann, belatedly checking that I hadn’t been left too far behind. 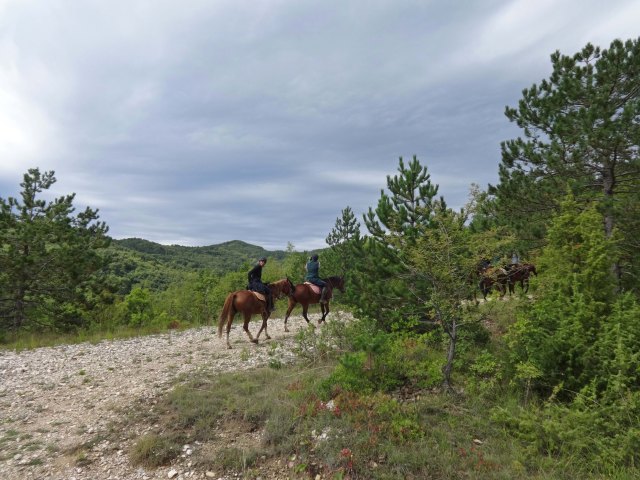 Almost out of sight around the bend. 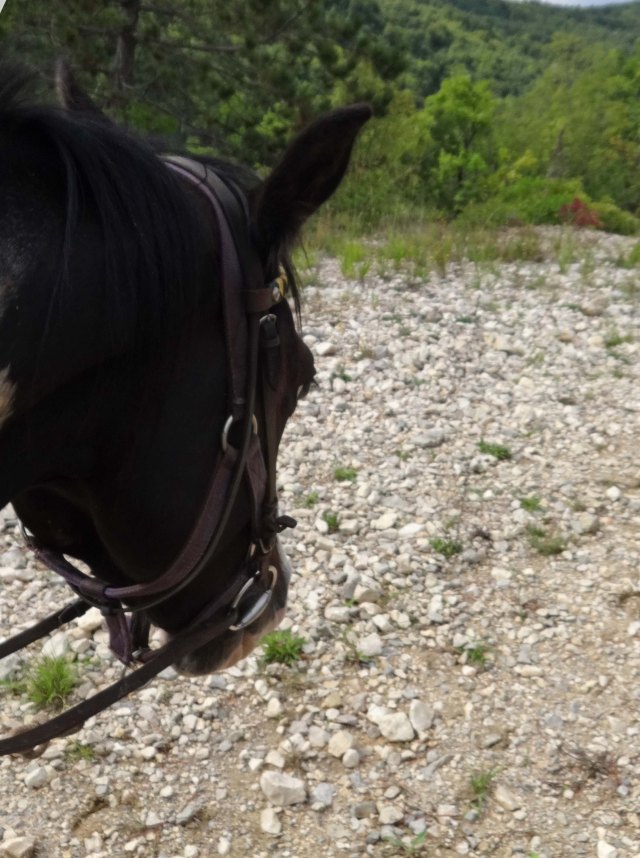 It’s just me, my horse and some stones. 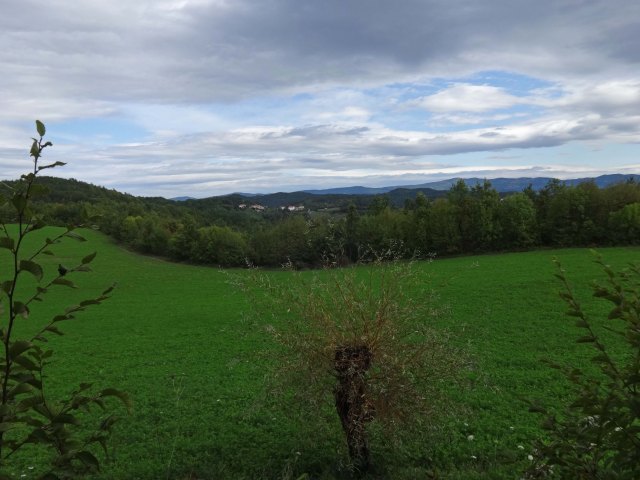 More varied scenery, this time with some very lush pastures. We were higher up here, after climbing stony paths for half the day. 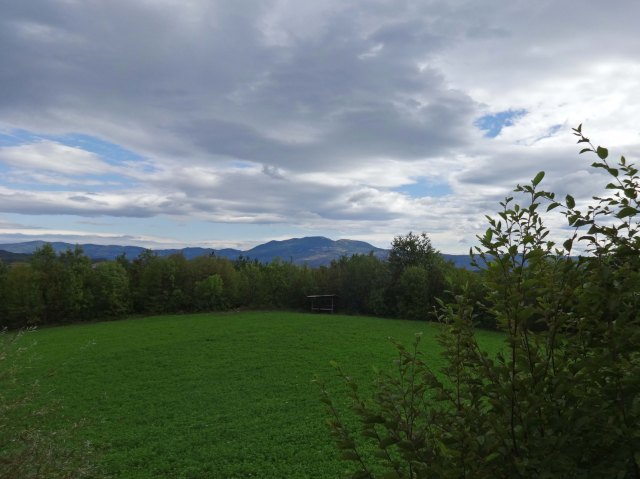 It really was that green. 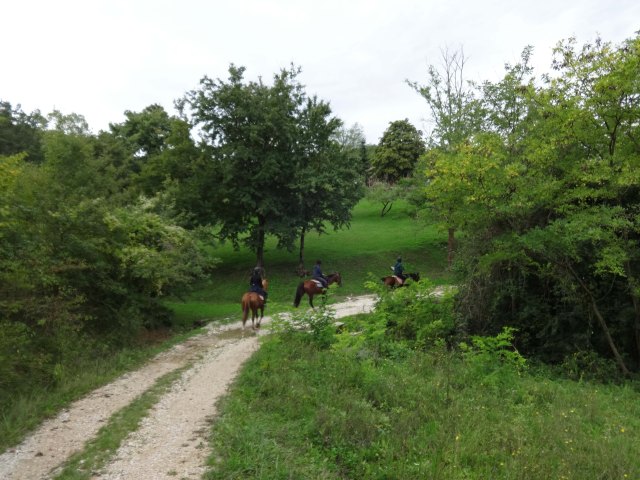 Horses In The Distance, during the green period. 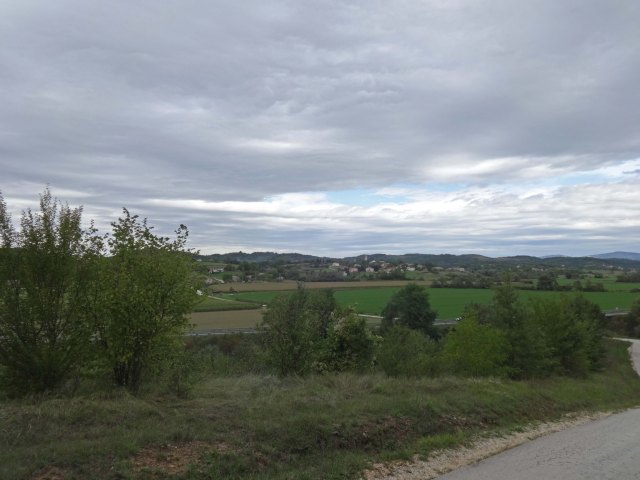 Civilisation in the distance. 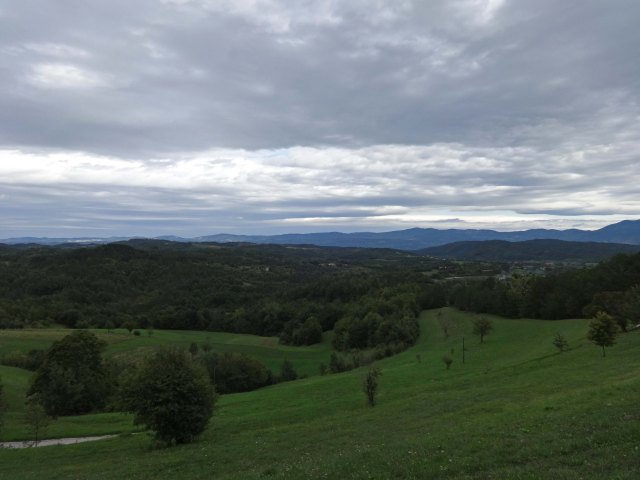 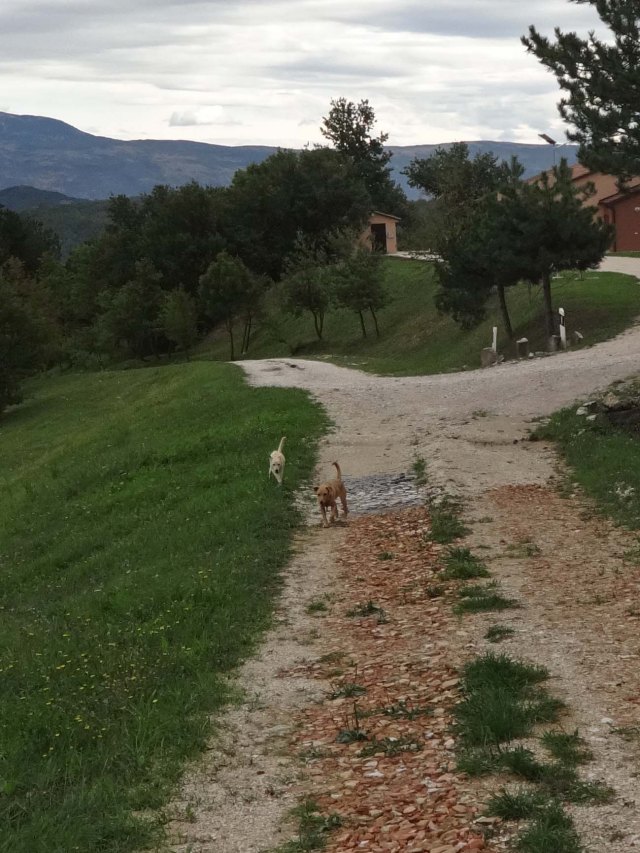 A few dogs would come out and see us on our way. These pair followed quite a long way, barking at Apache’s heels the whole time. He didn’t seem to care much. 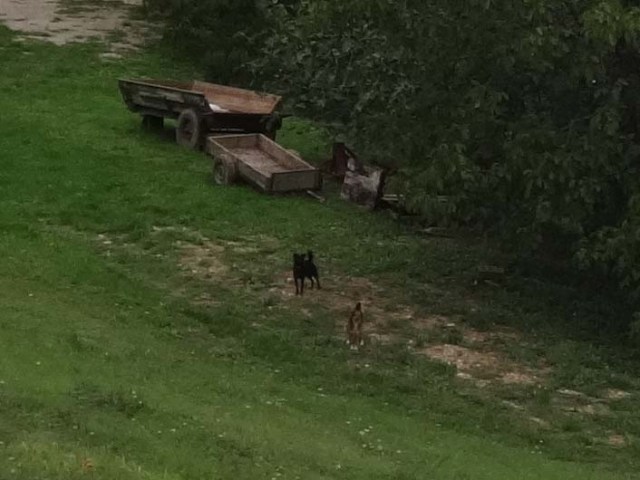 I wondered how far the previous two dogs would follow us, but these two on another property seemed a more attractive diversion than a bunch of horses so we waved goodbye to them. 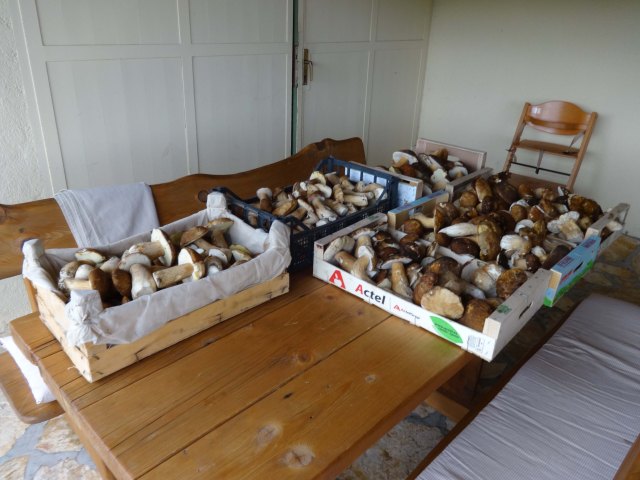 Lunch was in a restaurant, not a picnic for a change, and had a marvellous view. This isn’t it – this is a pile of mushrooms – but the view (that I didn’t take photos of) was great, honest. And so was the white wine. 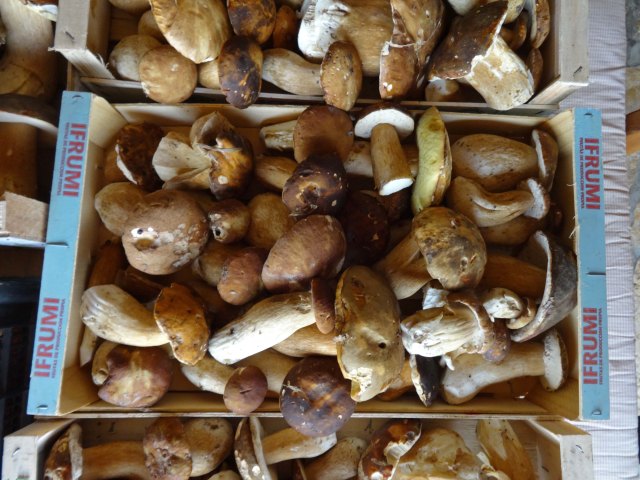 Mushrooms: the meat substitute of choice (just ask Patricia, the one vegetarian in the party). 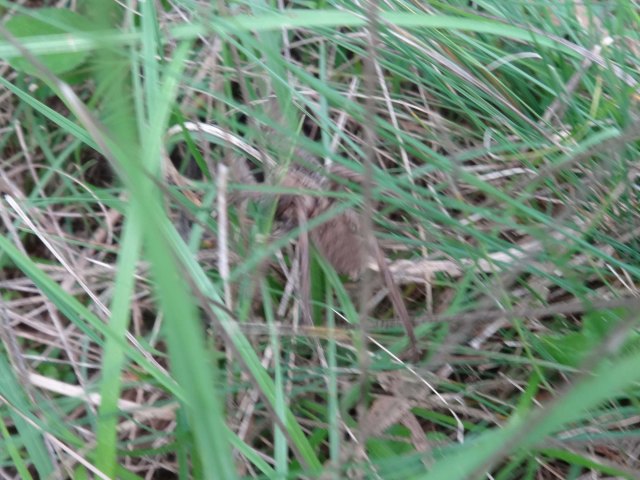 This was a spider, and it was big. It wouldn’t stand still, though, and I wasn’t about to rummage around in the grass to try to get a better photo. 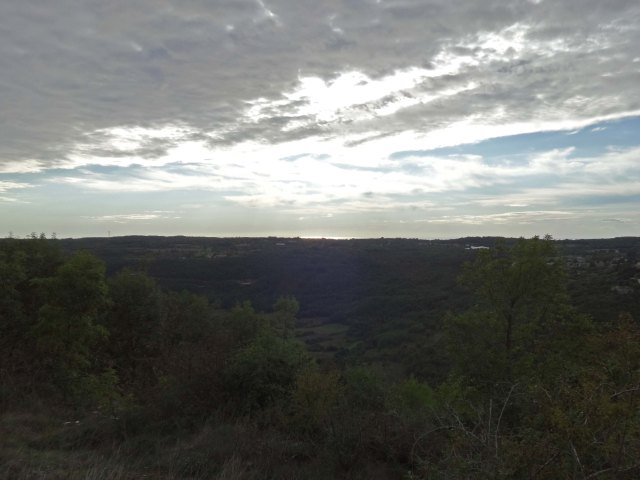 See that small glowing patch in the centre of the picture on the horizon? That’s the sea that is. 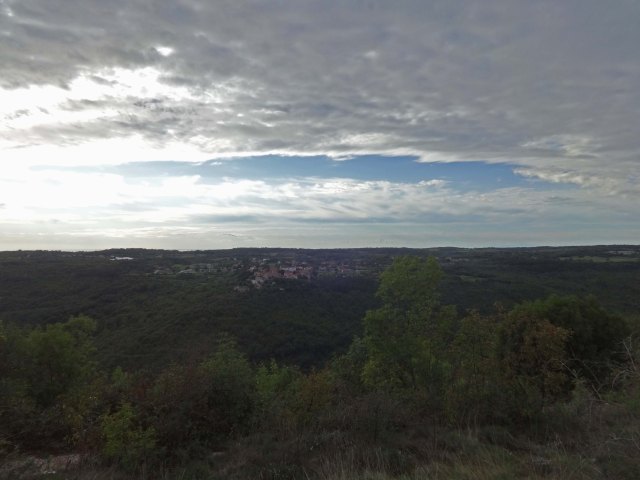 There’s probably some sea here too, but the weather was definitely improving throughout the day and it was good to see some blue in the sky. 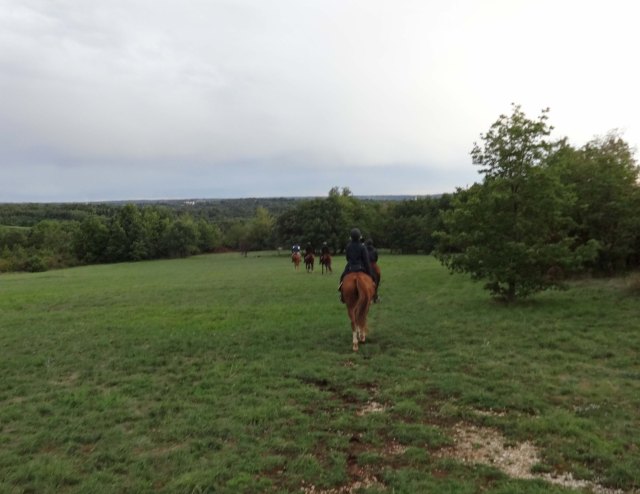 Although most of us still kept to the rain jackets. 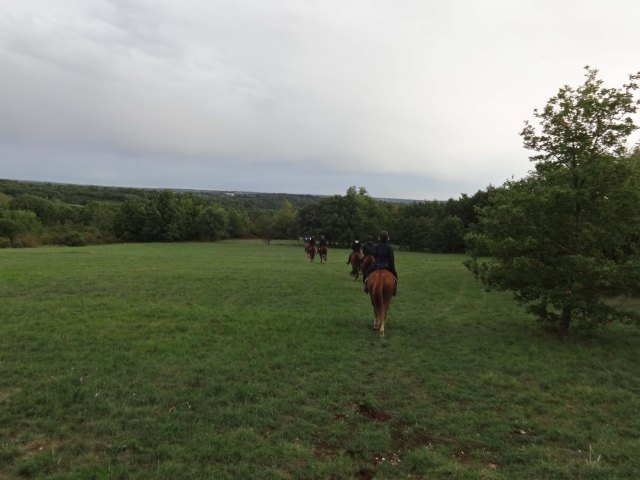 And so the fourth day passed without incident and with a much improved mood.

That night, after two in different locations, we were driven back to Karnevali to sleep at “home” (which we’d only known for two nights anyway).

This entry was posted in Uncategorized. Bookmark the permalink.

2 Responses to Riding in Istria – Day 4